Drinks for vegans – what to drink when you’re plant-based 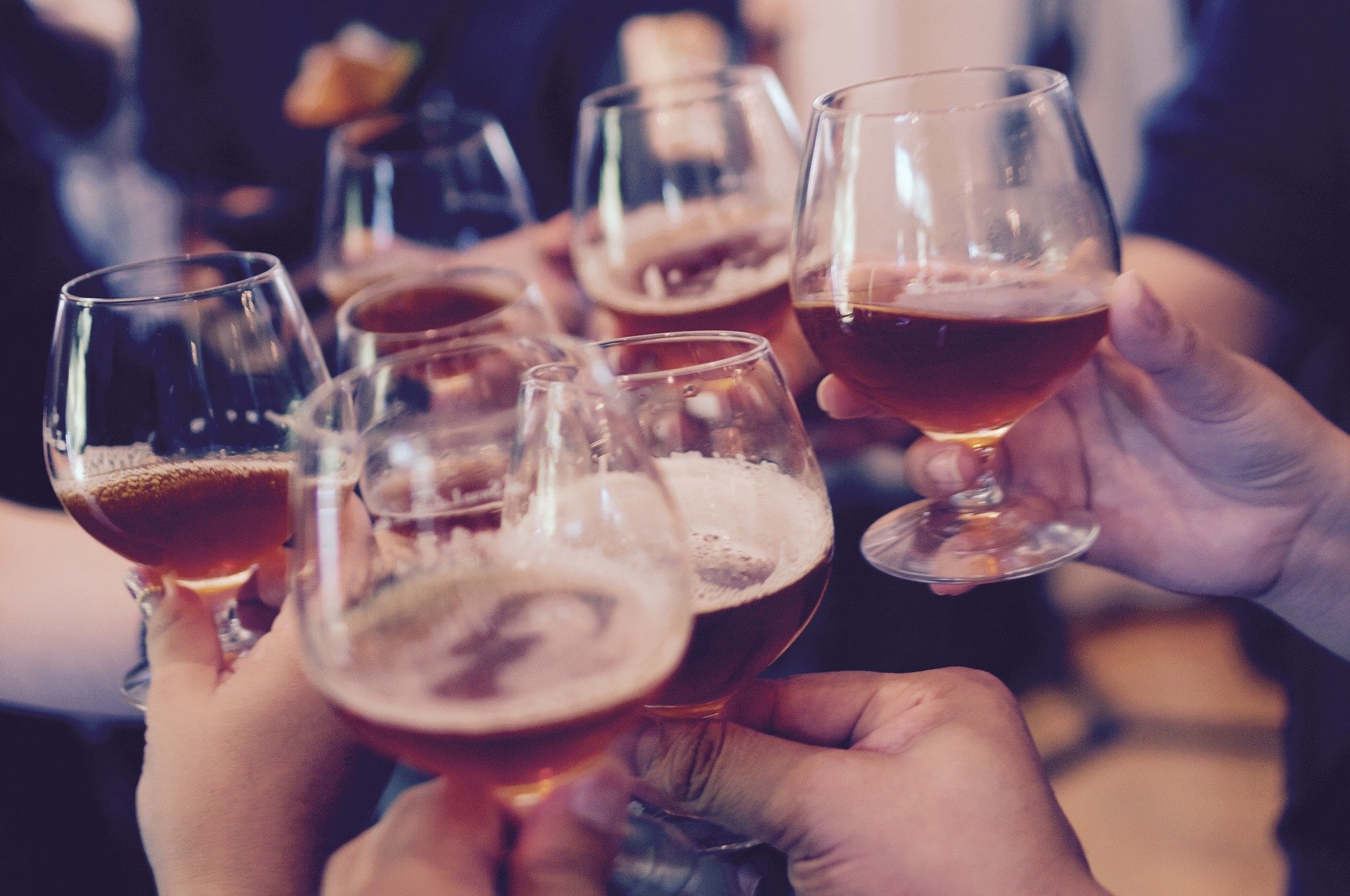 Looking for the best drinks for vegans? It’s harder than you might think! You might reasonably expect that most drinks are on the table when you live a plant-based lifestyle, but there can be a few nasty surprises in store!If you’re a vegan who’s excited about getting back out into the best beer gardens in the UK, you’re going to want to know there are beers and wines for you out there. But how to tell what’s safe and what isn’t?

What makes some beer and wine non-vegan?

Many popular drinks, especially beers and wines, are not suitable for vegans. This is largely due to the brewing process rather than actual ingredients of the drinks themselves. Wine, for instance, undergoes a process called “fining”, which removes a lot of the microscopic particles that can make wine cloudy, without the clarity that many drinkers prefer.This process involves things called “fining agents”. Brewers place them in the wine to act like magnets and attract the haze-causing substances. Traditionally, brewers have used fining agents like casein (which is a protein extracted from milk), albumin (egg whites), gelatin (animal protein) and isinglass (taken from the swim bladders of tropical or subtropical fish). As you may have noticed, these things are not vegan!The story is similar with beers. Many beer makers get their beers crisp and clear in a quick fashion by adding the same kinds of fining agents to the brew. Beer brewers most commonly have used isinglass – the fish bladder extract.Fortunately, the times, they are a-changin’, and many makers of beers and wines are opting to remove the non-vegan agents from their manufacturing processes. The most common ways to do this are to either use a vegan fining agent – bentonite and activated charcoal are growing in popularity – or to just wait for wines and beers to self-stabilise. Some drinks are even served completely unfiltered, for those who don’t mind little grit to their beverage.But all this is somewhat academic – what you want to know is what you can drink and what you can’t! We’ve put together this guide to the best vegan beers and wines that you can enjoy without any fear that animals were harmed in their creation. So kick up your feet, pour a tall glass, and enjoy!A side note: a hugely useful directory for any vegan looking to get their drink on is Barnivore, where the amazing team puts a huge amount of effort into keeping an up-to-date list of drinks for vegans.

The world of beer brewing can be a complex one, with brewers changing their recipes all the time. It’s very difficult to maintain a comprehensive, up-to-date and accurate list of vegan beers available in the UK right now, so where possible you should always ask the sellers or manufacturers.However, there are some beers you can rely on being vegan. Here we’ll run through a few tried and tested brands of beer that are great for vegans.

This Tottenham-based brewery ships beers up and down the country, and happily the beers are pretty much always vegan! The company doesn’t use isinglass or any other filtering agent; the only exceptions are some limited edition beers that include honey. All the classics, like Gamma Ray and Neck Oil, are completely vegan-safe! beavertownbrewery.co.uk

The famous craft brewery is registered with the Vegan Society, and its bottles and cans bear the society logo. The brewing process at Brewdog is completely free of fining agents – they use a giant centrifuge to extract unwanted particulates.[caption id="attachment_238" align="alignnone" width="750"]

Brewdog beer is not only vegan, but the company is also carbon negative! Image: Brewdog[/caption]The only exceptions are Brewdog beers that contain milk or honey in their ingredients: Jet Black Heart, Dogma and Electric India are prominent examples. So do always check before trying a new brew. If these ingredients aren’t present, you’re good to go! brewdog.com

We absolutely love the range offered by Cloudwater, and the company confirms that all of its beers always have been and always will be completely vegan! The dreamy, hazy pale ale is a particular favourite. cloudwaterbrew.co

The famous Belgian beer brand brews all of its deliciously strong beers with vegan-friendly methods! There are a few different options, but for our money, you can’t beat the classic original Duvel Belgian Strong Ale. duvel.com[caption id="attachment_239" align="alignnone" width="750"]

Fourpure's beers often come with a fruity twist, and they're all vegan. Image: Fourpure[/caption]

All the plentiful lagers, IPAs and ales from Fourpure are completely vegan, giving you a huge range of choices to sample. Whether you like an American brown ale, a session IPA, a refreshing pilsner or an oatmeal stout, Fourpure has a vegan beer for you! fourpure.com

Happy news for lovers of the black stuff: Guinness is one hundred per cent vegan! The company uses an updated filtration process that keeps Guinness smooth without any need for filtration products, so you can enjoy that perfectly poured and settled pint guilt-free. guinness.com[caption id="attachment_240" align="alignnone" width="750"]

Nothing beats a cooler of guilt-free beers. Image: Sierra Nevada[/caption]

The famous IPA-makers brew plenty of delicious beers, all of which are produced with vegan-friendly methods. Just watch out for one-off speciality beers that might contain milk or honey. sierranevada.com

If you’re not much of a craft beer person and just want a cold pint, plenty of the ordinary lagers served at almost every pub are vegan-friendly. Common vegan lagers include: Budweiser, Carlsberg, Corona, Cobra, Kronenbourg Heineken, Sol and many more! The one to avoid is Carling, which does still use isinglass in its process and is therefore not suitable for vegans.

There are absolutely loads of great vegan wines. However, be aware that many common wines still aren’t vegan, so it’s worth being discerning when you buy. As a general rule of thumb, if a wine is listed as “unfiltered” or similar, it’s probably safe, but you should still always check.Here are a few vegan wines we’d recommend…[caption id="attachment_241" align="alignnone" width="750"]

Every bottle of this delicious vegan wine purchased contributes towards the planting of trees in the Australian bushland. The brand includes a Pinot Grigio, a Chardonnay and a Shiraz. debortoli.com.au

Heavier reds tend not to be vegan, but this delicious, medium-bodied number is a glorious exception. The velvety texture is perfection personified, and it’s the ideal bottle to linger over. denbies.co.uk

All the wines and liqueurs made by this Suffolk-based winery are safe for vegans. The sandy clay by an ancient glacial riverbed near Long Melford. This lends itself well to growing grapes that produce dry, sparkling wines, and so we’d definitely recommend trying the whites. giffordshall.co.uk[caption id="attachment_242" align="alignnone" width="750"]

This Australian winery walks the walk and talks the talk when it comes to environmental protection. Not only are its wines vegan, but the company is also helping to remove plastic from the ocean. Try the Chardonnay for a crisp, refreshing bite. thehiddensea.com

This family-owned New Zealand winery produces wines of all different types, and since 2012, everything has been one hundred per cent vegan. The winery is famous for its Pinot Noir, but don’t sleep on the excellent Sauvignon Blanc. nautilusestate.com

For something different, try this fresh and fruity creation from a Slovenian winemaker. While not all the wines from Puklavec & Friends are guaranteed to be vegan, Furmint is good enough that you probably won’t want to stray from it! puklavecandfriends.comMissing the buzz of your favourite pubs? 24social is the best and easiest way to find you the perfect place to have a great day or night out! We are constantly looking out for the best bars, pubs, restaurants and clubs near you whether you're looking for a rooftop hotspot, a cosy jazz bar or the world’s best cocktails.Subscribe to our monthly twilight newsletter to be the first to hear about offers and exciting places around the biggest cities in the UK.